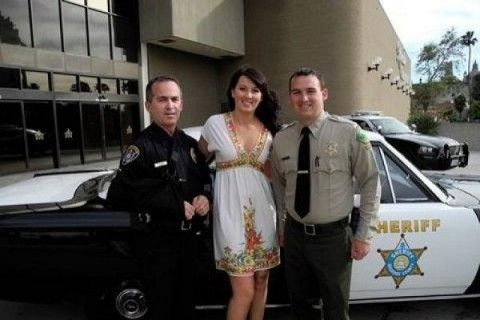 Steven Hobbs joined the San Diego Police Department in 1990. He had a distinguished career as a Police Officer and Detective. Steve worked several divisions throughout the City and finally served in the Street Gang Unit as a Detective before his retirement. He took great pride and responsibility for his gang sets in East San Diego, commonly referred to as Mid-City. Steve was responsible for the Hispanic gang sets, which consumed the condensed and impacted area of East San Diego. He had a vast working knowledge of the various sets he was monitoring and knew the majority of gang members on a one on one basis. Steve was a tenacious investigator who would not give up and also had empathy to those who were less fortunate.

Before Steve joined the San Diego Police Department, he enlisted in the United States Air Force. He served five years active duty and twenty three years as an active reservist. Steve was an Aero medical Evacuation Technician who provided health care and transportation to ill soldiers across the world. He was deployed during Operation Desert Storm and proudly served his Country at the rank of Senior Master Sergeant (E-8) and retired from the military in 2004.

Steve was also a martial artist and obtained his rank of black belt. He participated in local and state Karate tournaments fighting the toughest guys in his division. Steve has demonstrated so many accomplishments through his life and has done it selflessly. He has served his Country and the City where he works. During this time Steve also raised two wonderful children, his daughter Jackie and his son Travis.

In 2002 Steve was diagnosed with Parkinson’s disease. He fought this battle until the disease made the decision for him to retire in April 2014. This decision was made prematurely by his body and not his heart or soul. Steve had and still has a passion for Police work and misses it immensely each day.

In December of 2015, Steve underwent a surgery referred to as Deep Brain Stimulation. A device was implanted into his brain and left pectoral area. This machine is used to control the tremors caused by his Parkinson’s disease. The surgery was taken into consideration by his surgeons when he reached a level where he was progressively getting worse. The surgery was to help slow down the progression of his symptoms and disease. He continues to be positive and hopeful for a cure.

On January 12, 2015, Steve was taken to the Emergency Room after suffering loss of memory and movement of his limbs. He was immediately admitted and a CT scan was performed. The results revealed that Steve had a subdural hematoma and it was unknown if the bleeding was progressing. He was sent to the intensive care unit where he was monitored. He was later transported to Los Angeles where his initial surgery took place and where he could be under the care of his neurosurgeon.

During this time, Steve has been evaluated by a group of four neurosurgeons. They have concluded that he has Parkinson’s on both sides of his brain/body. He suffers from tremors and dyskenesia. Normally, patients with Parkinson’s will either have tremors or dyskenesia, not both. Steve is a rare case in which the doctors have seen no more than four cases in the State of California. Steve is less than one percent of the people who have this condition post brain surgery. At this time, doctors are hopeful to gain control of the tremors and dyskenesia with his implant and medications. Doctors will continue to monitor his condition over an eight week period and place him in a skilled facility, where he will receive a wide variety of therapies. This will help find Steve’s overall equilibrium that will assist him in his daily function.

Steve was transported to a skilled facility in Riverside on January 22, 2016, however the conditions were less than desirable and the overall rating of the establishment was two stars. The rehabilitation center was crowded with patients and this was not an environment where Steve could heal. Steve’s son, Travis checked him out of the facility and took him to Steve’s home. Travis has taken on the responsibility and personal care for Steve at this time. He is aggressively looking for a skilled facility where his father can be treated and cared for the next eight weeks. Travis currently lives in New Mexico. He immediately dropped everything and traveled back to California to be with his father. Jackie, Steve’s daughter also made last minute arrangements and flew from Dallas, Texas to assist Travis with their father’s medical needs. Both children have established residences and employment in their perspective States.

This coming week (Referring to January 25, 2016) both kids will travel back home to take care of some personal business and make future arrangements for their returns. They are also seeking a skilled rehabilitation facility before they depart to tend to their father’s medical recovery. In the interim, before Steve is placed into a facility, he will need the assistance of home health care at his residence. The home health care is not covered by his medical insurance. Steve is also not eligible to receive medical care from the Veteran’s Administration until he reaches the age of 60.

At this time, I am respectfully requesting any type of financial assistance that you can provide. Every little bit helps. Thank you for your time and assistance in helping a fellow brother in blue.